Black Bream (Acanthopagrus butcheri) complete their whole lifecycle within an estuary and can cope with salinity and temperature changes that would kill many other species. As hardy as they are, they are still ultimately reliant on healthy rivers and estuaries for their survival. 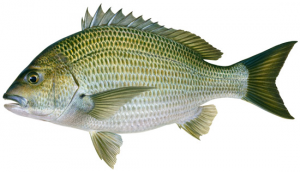 Black Bream belong to the sea bream family Sparidae and are related to WA species such as the tarwhine (silver bream), pink snapper and western yellowfin bream. They have a silver/olive brown upper body with brown/black fins. Growing to about 60 cm long and weighing 4 kg. However, Black Bream are mature by two to five years of age approximately 15-20 cm in length.

Black Bream are common in rivers and estuaries in the southwest of Western Australian with the most northern known population found in the Murchison River. Black Bream can live in freshwater to ‘hypersaline’ (highly salty) water. Juvenile bream tend to inhabit shallower waters whilst the adults prefer overhanging banks and living amongst the branches of dead trees found in the bottom of deep pools.

They are opportunistic feeders and eat everything from small crabs and fish to vegetation. They also use their peg-like teeth to prise mussels and barnacles from rocks and pylons.

Black Bream are rudimentary hermaphrodites and have both immature ovaries and testes when they are young. Before their first spawning they will turn either male or female.

Females release tens of thousands of eggs in several batches during the spawning season. However, many eggs and larvae won’t survive to become mature fish. As they grow, females produce more eggs and really large females may produce more than six million eggs per year.

The larvae hatch from the free-floating eggs after 2.5 days. After about four weeks, the larvae are about 10 mm in length. They then develop into juveniles and settle to the bottom of the estuary.

Although a hardy species, Black Bream can be seriously affected by poor water quality. In many WA estuaries, reduced river flow and increased nutrient run-off have adverse effects. Particularly on WA’s west coast, these factors can cause harmful algal blooms and hypoxia (low dissolved oxygen in the water) in summer, resulting in fish kills