The shells of this large marine mollusc were highly valued by Aboriginal people, who used them to store water. The name came about because early Europeans recorded Aboriginal people bailing out their canoes with these huge shells. 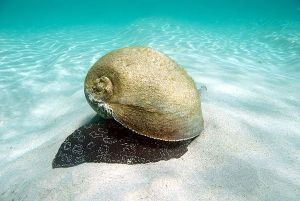 What do they look like? The shells of balers have attractive patterns. However, even more striking is the brown slug-like foot, which has intricate patterns of white lines that resemble an Aboriginal painting. The southern baler can reach a total length of 45 centimetres or more.

What they eat and how: They are carnivorous and prey on other molluscs such as scallops, tritons and turban shells.

Threats: Many of these large attractive animals have been killed for their shells, which are sometimes made into light shades.

Behaviour: Balers are generally nocturnal animals that scavenge for food on sandy bottoms. However, balers are occasionally seen by divers crawling along the seafloor in sandy areas, seagrass clumps or broken reef. By day they usually bury themselves in the sand.

Breeding and caring for young: The egg cases of the baler are sometimes found attached to rocks or other shells. These large translucent sponge-like cases contain more than 100 developing shells. They are left to hatch and the tiny shellfish that emerge must fend for themselves.

Conservation status: Baler shells are very common in many parts of northern Australia, but because so many of these animals have been killed for their shells, they are less common in more heavily populated areas such as south-west of WA.

How you can protect the baler shell: If you see a live baler shell please marvel at their beautiful shells and colouring but leave them where you find them for others to enjoy. You may not collect shells, even those that are dead, from below the high water mark of most marine parks in WA, as they can provide homes for other marine animals.