What was initially planned as a field walk to look at the revegetation work that the Nixon family have been undertaking on their property as part of the Smart Farms Grant expanded to become something much more.

After realising that the Liebe Group were also planning an AgChats session focusing on carbon farming, Bob suggested combining the two events and asking a few more speakers to be involved to give a broader picture of the challenges and opportunities involved for farmers with regards to carbon. From there came the event ‘Addressing the environment, soil health and economics of Wheatbelt farms’.

The afternoon began with a full bus and a caravan of utes heading out to the Nixon family farm. After an overview from Bob, the first stop was to look at a DPIRD trial site on the property, hearing from DPIRDs Gaus Azam, who discussed the degradation of Wodjil soils and building soil health. This was followed by a look at one of the ‘Blue Sky Corridors – Addressing the triple bottom line for Wheatbelt farms ’ revegetation sites and hear from Dan Wildy about the carbon model the Nixon family are working with.

With spring field days, AGMs, sports finals and everyone trying to catch up before harvest, it really is the season for event fatigue, which was one of the reasons it was such an excellent opportunity to collaborate and such a successful event because of this. The event comprised something for everyone with a varied agenda meaning participants who might be purely interested in the carbon credits hear about the bigger picture of building biodiversity, reducing wind and water erosion, reducing runoff and recharge, which means slowing the spread of salinity.

The site visit was followed by the official ‘AgChats’ part of the day, back at the Kalannie Sports club, there were short (10 minute) presentations from four speakers, including our own RALF Lizzie King – then question time. With plenty of questions and lots to talk about afterwards, this was an excellent format for engagement.

It was a great turnout with over 50 attendees and loads of information and engagement. It cemented that Carbon is undoubtedly the hot topic at this point in time. To learn more about what’s happening in the carbon space from Kerrie House see here: https://www.dropbox.com/s/i0gv00dw7g9ezz2/Northampton%20take%202-20210825_220530-Meeting%20Recording%204.mp4?dl=0

Congratulations to Bob and the Nixon Family, Liebe Group and the YYCMG on pulling together such a wonderful event. It was fantastic to have the opportunity to be involved. 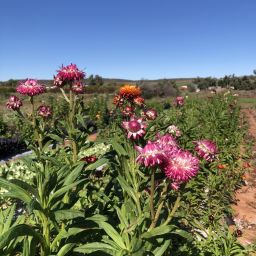 Come Buzz Around With Us