Coasties Are Back on the Job

After a couple of years hiatus, Coastcare Forums are back!

These meetings, organised by coastcarers for coastcarers between Guilderton and Leeman, recommenced on the 12th of March when the Jurien Bay Regional Herbarium Group (JBRHG) organised a fantastic return to form!

The event, supported by the WA Planning Commission’s Coastwest Grants Program, kicked off with a Welcome to Country by Yued Elder Mr Charlie Shaw. Afterwards, a quick trip down memory lane thanks to NACC NRM’s Coastcare Support Officer, Mic Payne with photos from previous forums since their inception in 2013.

We were all grateful that the Perth NRM Coastal team was able to escape the city for a time and share some of their extensive knowledge of all things coastcare, particularly their innovative ‘Adopt a Beach’ program. Then local Department of Biodiversity Conservation and Attractions (DBCA) stalwart Steve Buitenhuis gave us a rundown on local conservation estates, including some recent additions and the great collaborative projects with JBRHG.

Fascinating presentations followed from various coastcarers from around the region. Tim Gilbertson, a Ranger at the Shire of Coorow spoke about coastal rehabilitation and bush foods. Terry Houston of the WA Museum facilitated an interesting chat on native bees. Mr Houston warned the community to keep an eye out for those crazy furry smoke bush bees this spring! Don Williams of Hi Vallee Farm brought to the table an electricity-free and hands-on demonstration of the regions outstanding floral biodiversity. He also shared his unequivocal views on input from eastern states taxonomists on WA botanical nomenclature.

To lighten the mood, NACC NRM’s NARvis Project Officer Amanda Bourne marked a world first by taking us all through a game of her own devising – Dunes, Weeds and Waves. Following the same format as rock, paper, scissors but with a coastal look and feel! Who said coastcarers don’t know how to have a good time?

A huge thank you to the Jurien Bay Regional Herbarium Group and all those who contributed on the day for making this such a great event. 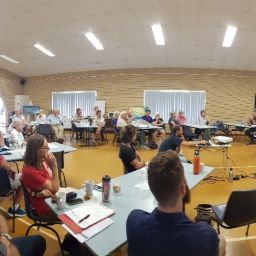