Hosted by Green Head Coast Care, and MC’d by Chair of the NACC Board Rob Keogh, the first day kicked off with the annual Coastcare Forum.

This annual forum was created by Coastcare groups from the southern towns of the Northern Agricultural Region (NAR) as an opportunity to network, collaborate and share what is going on in their own coastal patches. This year the groups extended invitations to all other Coastcare groups in the Mid-West to share their experiences and listen to a variety of guest speakers at the Forum.

The evening ended with a beach clean-up at Dynamite Bay and a yarn over a delicious BBQ on the foreshore.

The next day the Coastcarers ramped up again, this time to turn a patch of bare ground outside of the Green Head Community Hall and Skate Park into a lush garden with native flora. Over 30 guerrilla gardeners joined the NACC Coastal and Marine Team and completed the garden in under 3 hours.

A well-deserved lunch break came with a sampling of wild bush food, catered by Tim Gilbertson and Jane Sullivan. In the afternoon Coastcarers were treated to a marine debris art workshop with local artist Lorraine Malone.

Coastal and Marine Project Manager Hamish Longbottom said this year’s forum was by far the biggest event yet and feedback from participants was overwhelmingly positive.

“The cohesiveness of our Coastcare groups will be important in the future as our coastline faces increasing threats associated with climate change and increased development and recreational use,” he said.

“Coastcare groups in the region are well equipped to deal with these challenges.”

NACC would like to thank all Coastcarers for attending, guest presenters, special guests and the Shire of Coorow for supporting the event and providing assistance with preparing the site for the native garden.

What a fantastic effort today with #Coastcarers from the #MidWest. Green Head’s Community Hall and Skate Park has been decked out with #native #coastal #flora. @NACC_NRM #GreenHeadCoastCare #ShireofCoorow pic.twitter.com/x6DNLlb1nd

NACC’s Coastal & Marine projects are made possible through funding from the Australian Government’s National Landcare Programme. 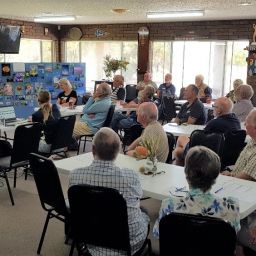 Coasties Are Back on the Job