It was all hands on deck last week as 60 Aboriginal Year 12 students attended the WA Central Leadership Camp in Dongara with the Clontarf Foundation.

As part of the leadership camp, the Clontarf Foundation set aside two hours for a community activity designed to give back and provide new experiences. To help the students complete this task, the Shire of Irwin, the Shire’s Sustainable Environment Committee and the Northern Agricultural Catchments Council (NACC) combined forces to provide a Clean-up Australia Day and noxious weed removal event.

Shire of Irwin’s Manager of Community Capacity, Nicole Nelson, who was instrumental in co-ordinating the clean-up activity was thankful for NACC’s assistance and the help provided by the visiting volunteers.

“The Shire of Irwin was very pleased that the Clontarf Foundation chose to host their Leaders Camp at the Irwin Recreation Centre,” she said.

“None of this could have happened without the assistance of NACC local officer Sarah Samulkiewicz-Taylor”, Nicole said.

The Clontarf volunteers managed to remove over 210 kg of rubbish from the local environment, including a couch and car parts that had been illegally dumped along with a significant number of plastic and glass beverage containers. In addition, 180 kg of the noxious weed, Verbesina encelioides, otherwise known as Golden Crownbeard was also removed.

NACC NRM Project Manager Sarah Samulkiewicz-Taylor said it was fantastic to work with both the Shire of Irwin and the Clontarf Foundation. “There was several areas where Verbesina was starting to encroach into coastal dunes and the remnant native vegetation,” she said.

“Having so many helping hands meant that a significant number of plants could be removed before they had the chance to spread further and establish in these sensitive areas. “Combined with the sheer volume of rubbish removed it was an amazing achievement, all in under a couple of hours, and the boys should be very proud of what they achieved!”

Staff from the Shire of Irwin and NACC along with volunteers from the Sustainable Environment Committee then separated the waste into recyclables and non-recyclables, weighed and categorised the rubbish. Julie Marsden from local Dongara business, Marsden’s Beckenham Transport, generously assisted by donating use of their weighbridge. The successful event is a great example of what can be achieved collaboratively.

This event was supported via NACC’s Elevate Your Impact project assisted by funding from the Western Australian Government’s State NRM Program supported by Royalties for Regions. 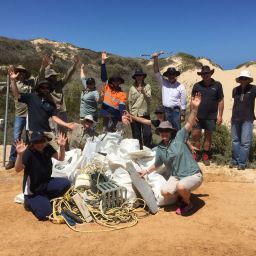 Business Clean Up at Flat Rocks 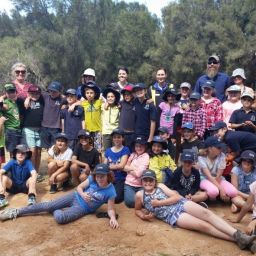