Climate change is a risk to a range of sectors, industries and ecosystems around Australia. Climate change impacts and risks therefore need to be considered in environmental policy development and in managing key government assets and World Heritage Areas. But what exactly is climate change? What drives Australia’s climate? How will our climate change into the future? And how does this relate to your policy area?

To address these questions and more last September, the Earth Systems and Climate Change Hub of the National Environmental Science Program invited climate change and environmental policy makers to join climate change scientists from across the Hub’s partner organisations to share expertise and knowledge and to build connections.

The roadshow consisted of six themes across two days and NACC NRM’s Aboriginal Program Coordinator Bianca McNeair had the honour to be invited to attend the thematic session Indigenous perspectives: learnings from a national Indigenous climate change dialogue.

As part of these sessions Traditional Owners gave their perspectives on climate change in their communities and how Traditional Ecological Knowledge is assisting to explore and create adaptation methods. 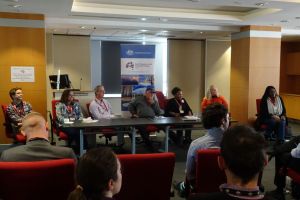 Djungan Paul Neal from Yarrabah, Queensland talked about the rising sea levels in the east coast of Northern Australia and shared his concerns for his community. Djungan commented that his community is no stranger to sea level change and that they have kept alive stories about these events that date back to ten thousand years ago.

Djungan also spoke about how the environmental that his community faces now is very different to the environment his ancestors cared for – this altered environment has been colonised and therefore poses different challenges to conserve and care for natural resources and significant cultural sites.

Bianca McNeair had the opportunity to discuss the loss of seagrass in Malgana country – Gutharraguda (Shark Bay) – and the cultural, community and economic repercussions this has caused.

Bianca stated ‘a third of the largest seagrass bed in the world was lost in the heatwave of 2010-2011 and its ability to remove CO2 from the atmosphere was degraded. The loss of the 8,000 year old seagrass resulted in the release of huge amounts of carbon dioxide into the atmosphere, the equivalent of up to the yearly output of two coal-fired power plants.’

‘Aboriginal peoples working alongside scientists brings together two different knowledge systems. Creating a new pathway for scientific research into climate change adaptation that is owned by the communities that are the most affected.’

‘With the support from Earth Systems and Climate Change Hub, Indigenous researchers and stakeholders are empowered to lead research and knowledge exchange activities and case studies relevant to their communities.’

Ms McNeair concluded by saying ‘Bringing together Aboriginal communities, policy makers and climate change scientists to discuss climate change and adaption is vital in conserving what is left of the most precious and biodiverse environments on this planet!”

NACC NRM would like to acknowledge Earth Systems and Climate Change Hub of the National Environmental Science Program for supporting Bianca to attend this event.