Can Do Attitude at Canna BioBlitz

Last weekend NACC NRM hosted our annual BioBlitz, and despite the warmer than usual weather were joined by more than 60 enthusiastic citizen scientists.

What is a BioBlitz you ask – a BioBlitz is a 24 hr camp-out that aims to count and name as many species as possible, providing a snapshot of the biological diversity of an area.

The 2019 event was held at Canna Reserve – a C Class Reserve vested with the Shire of Morawa and home to a well-known Malleefowl population and several priority flora.

Over the two days participants were able to explore and survey the reserve with the support of our team leaders – David Knowles from Spineless Wonders conducting the invertebrate surveys, Midwest flora expert Jenny Borger, Dave Pongracz from the Department of Biodiversity, Conservation and Attractions searching for vertebrates and BirdLife Midwest-Geraldton member Alice Bishop. Local residents Paul and Sue Offszanka – caretakers of both the reserve and the campground – were also in attendance and generously shared their knowledge of the area. 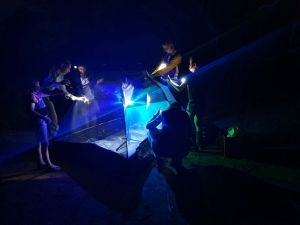 Highlights included finding fluorescent scorpions on the night stalk, spying a Stimson’s python hidden among the granite outcrop, peeking in on a Galah chick in its nest with the aid of Cocky Cam, finding a Bynoe’s Geckos mid-shed; disturbing a monitor eating a parrot chick and christening NACC NRM’s fire drum.

NACC NRM’s Bushcare Officer Jarna Kendle said there were a lot of highlights during the weekend but for her capturing an image of a Malleefowl on one of the motion sensor cameras is high on the list.

Jarna added that “a BioBlitz is a great way of engaging the wider community in a fun and meaningful way while exploring the incredible biodiversity we have on our doorstep. 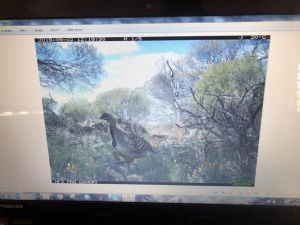 “Everyone had a great time collecting data, learning about the natural environment, making new friends and taking home fond memories of the weekend.”

Stay tuned for the final report with which will include more highlights and a full list of species.

This event was supported by NACC NRM, the Shire of Morawa and the Department of Biodiversity, Conservation and Attractions through funding by the Australian Government’s National Landcare Program.