Black Cockatoos – Where are you?

This Autumn NACC NRM and Birdlife Midwest-Geraldton returned to Chapman Valley to count our states northern-most population of Carnaby’s Black-Cockatoos during the 2019 Great Cocky Count. 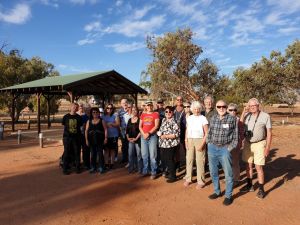 The Great Cocky Count is a Birdlife Australia initiative that uses a citizen science project to provide a snapshot of the black cockatoo populations across Western Australia one night in early April every year.

Southwestern Australia’s iconic and much-loved Carnaby’s Black-Cockatoos are threatened at the state and national level and over the 10 years the Great Cocky Count has been running, their numbers have continued to decline.

After a shared afternoon tea at the picturesque Fig Tree Crossing, the eager citizen scientists split into three groups to monitor roosting sites in the area.

One fortunate group spotted a flock of around 140 Carnaby’s Black-Cockatoos as they foraged on the ground and then in Eucalypt and Banksia trees, before eventually disappearing down the valley to an unknown location.

The other volunteer teams waited patiently at two previously known roosting sites but were not so lucky and didn’t get to see any Carnaby’s Black-Cockatoo this year. But the night was not without joy, as a myriad of other birds were spotted, including this Red-capped Robin

NACC NRM’s Bushcare Officer Jarna Kendle said that it was great to see so many people volunteering their time for this important citizen science project.

“Carnaby’s Black-cockatoos are found nowhere else in the world and we should all do our part to help conserve their population.”

“For me, the highlight of the event was being able to see so many Carnaby’s Black-cockatoo thriving in the highly modified and changing landscape.”

Birdlife Mid-west Geraldton member Heather Beswick also said that it was just fantastic to see so many people turn up and a lot of new faces.

“This year’s count had mixed results with birds – about 140 – only seen at one site and they didn’t roost but continued down the valley.”

“This is still useful data though, as at least we know they are in the area and they numbers are consistent with last year’s count – so good news in that the numbers have not declined.”

“Many thanks to NACC NRM for their fantastic support of this very special event for an extremely charismatic bird and one too precious to lose.”

If you have any information about this Chapman Valley flock please contact Birdlife Midwest-Geraldton via their Facebook page https://www.facebook.com/groups/birdlifemidwest/

This event was supported by NACC NRM and Birdlife Midwest-Geraldton.

Another site that might be worth following up is Greenough river at Eradu, for actual location ask Ian Blayney as he used own the property & kept a count of them.
On the other side of the story a friend in Perth has trouble with them chewing the trees, probably because they removed the Pine trees on Gnagarra mount