A Reflection on World Wetlands Day 2019

To celebrate Worlds Wetlands Day 2019, the team at NACC partnered with Chapman River Friends to highlight a hidden gem right in the heart of Geraldton – the Chapman River.

And what better way to explore the estuary than with a dawn walk.

More than thirty ‘early birds’ joined the walk, which started with a slight detour along the foot bridge and a conversation about coastal salt marshes.

“Coastal salt marshes provide extensive ecosystem services such as filtering surface water prior to it entering the sea, carbon sequestration, coastal productivity, nursery habitat for a range of fisheries species, provision of food and nutrients to adjacent marine and estuarine ecosystems, and stabilisation of coastlines.” 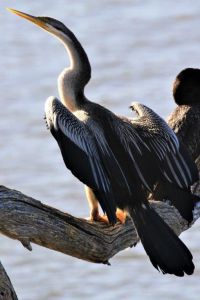 And talking about birds, nineteen different types of bird species were spotted during the walk including – but in no way limited to – White-faced Heron, Osprey, Common Sandpiper, Silver Gulls, Sacred Kingfisher and not one, not two but three Great Egrets.

After the excitement of seeing so many birds, some of the stark realities of the coastal environmental set in as the group discussed sea level rise and erosion – with the help of an interactive model.

As the two hour walk drew to a close, the smell of coffee wafted across the breeze and everyone was delighted to see that morning tea was ready and the coffee was hot.

NACC’s Bushcare Officer Jarna Kendle said it was amazing to see so many people enjoying the great outdoors and learning more about wetlands.

“Volunteer groups play a significant role in the NRM sector and their efforts really are making a world of difference.”

Stay tuned to NACC Notes and Facebook to found out when Chapman River Friends are hosting their annual Clean Up Australia Day – which this year will be held in May to avoid the summer heat. Birds photos courtesy of Chapman River Friend Heather Beswick